Patriarch of Romania in white?

Hello all,
I have been following the Pope's visit to Romania and am struck by the fact that Patriarch Daniel is dressed in white robes.
A quick search shows that he usually dresses in this colour, which seems unusual for Orthodox patriarchs, no?
Is there a reason for this? Just wondering.
Posted By: griego catolico

I did a search online and came across this page in Romanian: www.crestinortodox.ro/stiri/ziarul-lumina/doar-patriarhul-romanilor-imbraca-78467.html

Quote
In the Romanian Orthodox Church, the Patriarch's everyday clothing is white. This is a tradition of our Church, the only one in which the patriarch is completely dressed in white. In the churches of the Slavic rite, the patriarch has black outfits, but the white camel. In the Greek Rite Churches, the patriarchs wear black outfits, including the ecumenical patriarch. Tradition says that this option as the Romanian patriarchs to wear clothing is the expression of the permanent canonicality of the Romanian Orthodox Church, which has never deviated from the communion of Orthodoxy, being a Church preserving the truth.
Posted By: theophan

One of the past metropolitans of what is now the Orthodox Church in America once adopted the same clothing. I have never seen an explanation of why.

While my reply doesn’t answer the OP, I thought I could provide some background to the papal attire. Depending on the source, the papal soutane/cassock had not always been white. Some historians point to the election of Innocent V in 1276 as the first Bishop of Rome to adopt the white attire. Other historians say it occurred much later, in 1566 with the election of Pius V. Interestingly, both men had been Dominican friars prior to their elections as the Bishop of Rome, and as the habit of the Dominicans is white, they chose to wear the habit of their religious order.

With respect to the attire of Eastern Orthodox/Catholic Bishops, there is a similar history. With the Triumph of Orthodoxy in 843 under Empress Theodora, the monks were seen to be more faithful to the Orthodox faith than the secular clergy who we’re usually more sympathetic to the iconoclasm of previous emperors. As a result, monks were appointed to the episcopacy, and these bishops continued to wear their (black) monastic habit. Even Eastern Orthodox/Catholic bishops who were never monks have adopted the black monastic habit as episcopal attire.

Bob, it was Metropolitan Jonah of the OCA who wore the full white habit, but only during the Paschal season. outside of the Paschal season, he resumed wearing the black exorason with white kamilavka.
Posted By: Filipe YTOL

Thanks for the answers!
Posted By: griego catolico 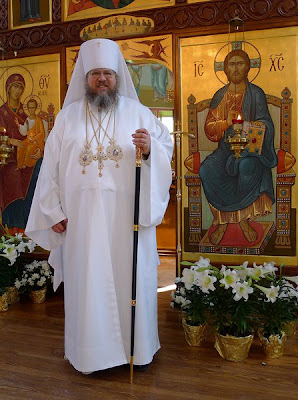 Further discussion on Metropolitan Jonah and other clergy wearing white can be found over at the Orthodoxchristianity.net Forum: link.
© 2020 The Byzantine Forum