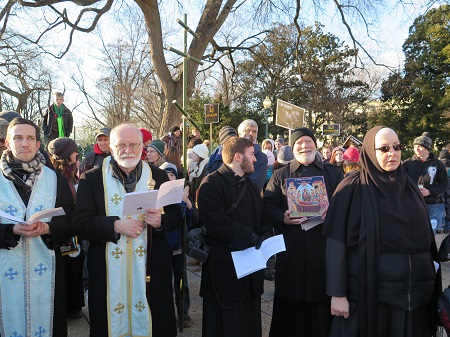 Byzantine Catholics join with almost a half million other Americans in the 2015 March for Life in Washington, DC commemorating the anniversary of Roe v Wade, the U.S. Supreme Court decisoin that legalized the murder of children in the womb through abortion during all nine months of pregancy.

Photo is of the Akathist to the Mother of God prayed near the Supreme Court. Below see additional phoots and video.

The March for Life began as a small demonstration and rapidly grew to be the largest pro-life event in the world. The peaceful demonstration that has followed on this somber anniversary every year since 1973 is a witness to the truth concerning the greatest human rights violation of our time, abortion. For more information see marchforlife.org/march-for-life-2015/

“Those who are well have no need of a physician, but those who are sick. I have not come to call the righteous but sinners to repentance.” (Luke 5:31-32 ESV)

O Lord and Master of my life, drive away from me the spirit of despondency, carelessness, love of power, and idle chatter. (Prostration)

Rather grant to me, Your servant, the spirit of wholeness of being, humility, patience, and love. (Prostration)

Yes, O Lord and King, grant that I may see my own faults and not condemn my brother; for You are blessed to the ages of ages. Amen. (Prostration)

Adam, before the fall ... participated in ... divine illumination and resplendence, and because he was truly clothed in a garment of glory he was not naked, nor was he unseemly by reason of his nakedness. He was far more richly adorned than those who now deck themselves out with diadems of gold and brightly sparkling jewels. St. Paul calls this divine illumination and grace our celestial dwelling when he says, 'For this we sigh, yearning to be clothed in our heavenly habitation, since clothed we will not be found naked' (2 Cor. 5:2).

St. Gregory Palamas (Topics of Natural and Theological Science no. 67, The Philokalia Vol. 4 edited by Palmer, Sherrard and Ware; Faber and Faber pg. 377)