Matthew 14:25-27 - Then he made the disciples get into the boat and go before him to the other side, while he dismissed the crowds. And after he had dismissed the crowds, he went up on the mountain by himself to pray. When evening came, he was there alone, but the boat by this time was many furlongs distant from the land, beaten by the waves; for the wind was against them. And in the fourth watch of the night he came to them, walking on the sea. But when the disciples saw him walking on the sea, they were terrified, saying, "It is a ghost!" And they cried out for fear. But immediately he spoke to them, saying, "Take heart, it is I; have no fear." (RSV)

"It is a ghost! And they cried out for fear.” This is the way the Lord constantly deals with our fears. He does not hesitate to bring on worse things, even more alarming then before. They were troubled here not only by the storm but also by the distance from the land. Note that He did not too easily remove the darkness. He did not come quickly to their rescue. He was training them, as I said, by the continuance of these fears and instructing them to be ready to endure. (St. John Chrysostom)

The icon is of the Dormition of Anna (July 25th). 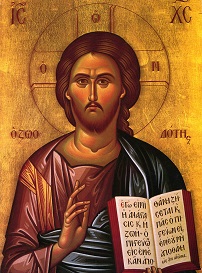