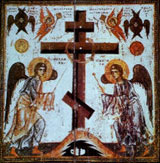 John 3:13-17 - "No one has ascended into heaven but he who descended from heaven, the Son of man. And as Moses lifted up the serpent in the wilderness, so must the Son of man be lifted up, that whoever believes in him may have eternal life." For God so loved the world that he gave his only Son, that whoever believes in him should not perish but have eternal life. For God sent the Son into the world, not to condemn the world, but that the world might be saved through him. He who believes in him is not condemned; he who does not believe is condemned already, because he has not believed in the name of the only Son of God. (RSV)

Are You a Sheep or a Goat? – Many of the more careless sort, using the loving kindness of God towards men to increase the magnitude of their sins and the excess of their disregard, speak in this way saying: “There is no hell, no future punishment. God forgives all our sins….”  But let us remember that there are two advents of Christ, one past, the other still to come. The first was not to judge us but to pardon us. The second will not be to pardon us but to judge us. It is of the first that He says: “I have not come to judge the world but to save the world.” But of the second He says: “When the Son shall come in the glory of His father, He will set the sheep on his right hand and the goats on his left.” (Mt 25:31) And the sheep will go into life and the goats into eternal punishment. (St. John Chrysostom)

The icon is of the Exaltation of the Cross (September 14th).

October
1 The Protection of our Most Holy Lady the Mother of God and Ever-Virgin Mary
11 Columbus Day (USA), Thanksgiving Day (Canada)
17 Sunday of the Fathers of the Seventh Ecumenical Council

November
8 Synaxis of the Archangel Michael and the Other Bodiless Powers
11 Veterans' Day (USA), Remembrance Day (Canada)
15 Nativity Fast (Philip's Fast also known as Advent)
21 The Entry of the Most Holy Mother of God into the Temple
25 Thanksgiving Day (USA)

O Christ our God, You are most glorious, * for You established our Fathers as lights upon the earth * and through them led us to the true faith. * O greatly Compassionate One, glory to You! (Troparion, Tone 8)

The Son Who shone forth ineffably from the Father * was born two-fold in nature. * Beholding Him, we do not refuse the image of his form, * but piously depicting it, we honor it faithfully. * Therefore the Church, holding fast to the true faith, * kisses the icon of the incarnation of Christ. (Kontakion, Tone 6)

The fear of the Lord is the beginning of knowledge; fools despise wisdom and instruction. (Proverbs 1:7 ESV)

Long ago, the wily one cast his weapon and wounded Adam and killed him; Indeed, he completely destroyed the weak man. But now, even if he struck the bodies of the noble men, he did not destroy their spirits. He persuaded the first-created man to fall by words, but not even by deeds, the noble ones. Bewitching the former, he made promises; he made offers to the latter: For Adam, the making of a god; for the martyrs, honor. He offers what he does not have; he suggests bestowing things not in his authority. Therefore, saints, having shattered his scheme, You gained crowns.

Kontakia of Romanos, On the Forty Martyrs of Sebasteia I.