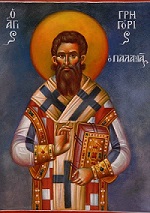 Mark 2:1-12 - When [Jesus] returned to Caper'na-um after some days, it was reported that he was at home. And many were gathered together, so that there was no longer room for them, not even about the door; and he was preaching the word to them. And they came, bringing to him a paralytic carried by four men. And when they could not get near him because of the crowd, they removed the roof above him; and when they had made an opening, they let down the pallet on which the paralytic lay. And when Jesus saw their faith, he said to the paralytic, "My son, your sins are forgiven." Now some of the scribes were sitting there, questioning in their hearts, "Why does this man speak thus? It is blasphemy! Who can forgive sins but God alone?" And immediately Jesus, perceiving in his spirit that they thus questioned within themselves, said to them, "Why do you question thus in your hearts? Which is easier, to say to the paralytic, `Your sins are forgiven,' or to say, `Rise, take up your pallet and walk'? But that you may know that the Son of man has authority on earth to forgive sins" -- he said to the paralytic -- "I say to you, rise, take up your pallet and go home." And he rose, and immediately took up the pallet and went out before them all; so that they were all amazed and glorified God, saying, "We never saw anything like this!" (RSV)

Rise and Walk! Your sins are forgiven! – Take up your bed. Carry the very mat that once carried you. Change places, so that what was the proof of your sickness may now give testimony to your soundness. Your bed of pain becomes the sign of healing, its very weight the measure of the strength that has been restored to you. (St. Peter Chrysologus)

The icon is of St. Gregory Palamas, who is commemorated in the Byzantine Church especially on the Second Sunday of the Fast.  Saint Gregory Palamas (1296-1359) was a monk, archbishop and eminent theologian.  He was also a major figure in fourteenth-century Byzantium.  His greatest work, In Defense of Holy Hesychasts [commonly known as the Triads], was written between 1338 and 1341 as a response to the charges of Barlaam.  Barlaam denied the legitimacy of the spiritual methods of Byzantine monastic groups known as hesychasts and discredited their claims to experience the divine presence.  Hesychasm, a movement dating back to the Fathers of the desert, believed that since the body itself receives the grace of sacraments and the pledge of final resurrection it would properly have a share in "pure prayer".  They believed that God is accessible to personal experience because He shared His own life with humanity.  It is from this tradition that we have the famous "Jesus Prayer": “Lord, Jesus Christ, Son of God, have mercy on me, a sinner!”

“You have heard that it was said, ‘You shall love your neighbor and hate your enemy.’ But I say to you, Love your enemies and pray for those who persecute you.” (Matthew 5:43-44 ESV)

The fear of the Lord is the beginning of knowledge; fools despise wisdom and instruction. (Proverbs 1:7 ESV)

According to the text, `We are the body of Christ and each of us is one of its members' (cf. 1 Cor. 12:27), we are said to be the body of Christ. We do not become this body through the loss of our own bodies; nor again because Christ's Body passes into us hypostatically or is divided into members; but rather because we conform to the likeness of the Lord's flesh by shaking off the corruption of sin. For just as Christ in His manhood was sinless by nature both in flesh and in soul, so we too who believe in Him, and have clothed ourselves in Him through the Spirit, can be without sin to Him if we so choose.