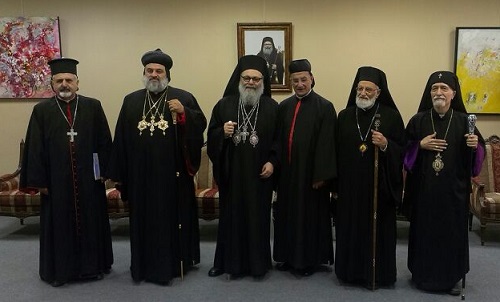 Balamand - “With pride and humility, reverential fear and responsibility, I bear this ancient, apostolic title of Patriarch of Antioch and All the East,” says Gregorios III

“With pride and humility, reverential fear and responsibility, I bear this ancient, apostolic title of Patriarch of Antioch and All the East … “ In these emotionally charged terms Gregorios III began his talk in which he went on to mention all the factors that ensured that the culture of the see of Antioch was “multifaceted and varied. First Greek, then Syriac and Arabic, it is at once more than Greek, Syriac and Arabic, or even than Latin and Roman … The Patriarchate of Antioch is the only see to have successively composed its services in those three languages.”

“…The Antiochians loved Greek civilization and culture so much that they assimilated it to the point of baptizing and Christianizing it before making it Arab and passing it on to the Muslim Arab world, turning it into the basis of a multicultural society and laying the foundations for knowing how to live together … From the Arab world, Greek culture went on to conquer Europe.”

“Thy Nativity O Christ, our God, has shone upon the world the light of knowledge. For by it those who worshipped the stars were taught by a star to worship thee, the Sun of Righteousness, and know thee, the Dayspring from on high. O Lord, glory to thee!” Citing this troparion of the Nativity of Our Lord, Gregorios III, recalled how, though Jesus Christ was born in Palestine, Christianity itself was born in Antioch, and that light came from the East, as Pope Saint John Paul II splendidly explained in his Apostolic Letter, Orientale Lumen.

“The Patriarchate of Antioch took up the challenge of keeping the deposit of faith and being open to others, such as the Muslim Arab world, Constantinople and the West, and was similarly distinguished by preserving Christian unity, and refusing to tear Christ’s tunic, the seamless robe, and not taking sides when Rome and Constantinople split apart…”

Gregorios III wished that “this first Antiochian Orthodox conference might in future years become an Antiochian conference in which laity and clergy of the five Churches belonging to the See of Antioch would participate, so fulfilling the prayer of Our Lord Jesus Christ: that they might be one…that the world may believe!”

For the complete Arabic text see the website of the Patriarchate: http://www.pgc-lb.org/home