Ain Traz - On Saturday 20 June, at the summer seat of Ain Traz (Lebanon), the Holy Synod of the Melkite Greek Catholic Church finished the work it had begun on 15 June.

A feature of this synod was the arrival of the pilgrim statue of Our Lady of Fatima, on the morning of 15 June just a few hours after the opening. Hundreds of faithful turned up to honour Our Lady and to pray for peace. Patriarch Gregorios III of Antioch and All the East, of Alexandria and of Jerusalem, surrounded by the Synod Fathers, confided their meeting to the intercession of Our Lady of Fatima.

The Syriac Orthodox Patriarch of Antioch and All the East, Mor Ignatius Aphrem II, accompanied by bishops of his synod, visited the Synod of the Melkite Greek Catholic Church for the first time. This visit reciprocated one made by Patriarch Gregorios, accompanied by many of his bishops, to the Synod of the Syriac Orthodox Church, meeting at its headquarters at Maarat Saidnaya (Syria).

In his address at Maarat, Patriarch Gregorios had emphasised that “what unites us is much greater than what divides us” especially nowadays, when “we are experiencing, in Syria and Iraq, the ecumenism of blood.”

As every year, the Apostolic Nuncio to Lebanon, Archbishop Gabriele Caccia, honoured the synod with his presence, bringing greetings and blessing from the Holy Father. His Beatitude and the Synod Fathers took the opportunity to express their attachment to Pope Francis and their total support for his initiative on unifying and fixing the date of Pascha.

The situation and future of the family was at the heart of the Synod’s concern and the topic of a presentation by Abbot Semaan Abou-Abdo O.M.M., who highlighted the problems and challenges facing the Christian family today in an extremely secularised world that leaves no room for God and Christian values. The Fathers decided to create and develop centres of catechesis and Christian education in all eparchies, for better preparation for marriage and as listening and reception centres for families in crisis.

The Syrian crisis and all Middle Eastern crises that are tearing the region apart and adversely affecting all eparchies in the Middle East were discussed at great length by the Fathers, who prayed for the way of dialogue and cease-fire to prevail over everything else and for the coming of a time to rebuild hearts and stones; beseeching those sons and daughters scattered abroad to look to their ancestral land and act as its real ambassadors in their new homeland and lobby for the way of peace to be open to all.

The bishops of the expansion profited from being together in Ain Traz to meet and discuss the particular situation of each of their eparchies.

The Fathers of the Melkite Greek Catholic Church launched an appeal to all Lebanese political leaders to ensure that Lebanon have a President of the Republic very soon in compliance with constitutional rules; they welcomed reconciliation and dialogue between the various parties and fully supported the Lebanese Army and security forces; recalling that Lebanon’s Melkite Greek Catholics ought, like other communities, to have access to the positions and functions traditionally reserved for them, and wishing to see their lawful quota of vacancies allocated to them. 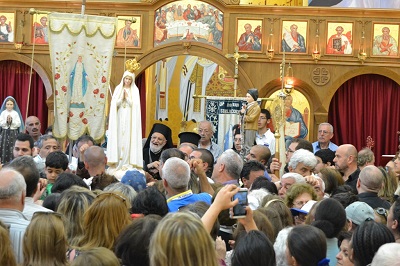 Archimandrite Naim Gharbi, Rector of the Major Seminary of Saint Anna, gave a report to the Synod about the seminary’s growth and development.

The Fathers studied several administrative, canonical and pastoral matters, especially those concerning the sacrament of marriage and the family, with an eye to the Synod on the Family next October at the Vatican, in which Patriarch Gregorios III and Archbishop Georges Baccouni, Metropolitan of the Archeparchy of Acre, Haifa, Nazareth and All Galilee will take part.

They decided to add Saints Sharbel Makhluf, Francis of Assisi, Rafqa, Rita, Nimatullah al-Hardini, Don Bosco, Ignatius of Loyola, Teresa of Avila, Thérèse of Lisieux, John Paul II, John XXIII, Vincent de Paul, Mary of Jesus Crucified and Alphonsine to the Ordo of the Melkite Greek Catholic Church. Those saints will be commemorated on their feast-day according to the Ordo of their original Church so that they can be examples for everyone on the path to holiness.

The synod firstly elected the Most Reverend George Baccouni, Metropolitan of the Archeparchy of Acre, Haifa, Nazareth and All Galilee, to take part, on behalf of the Church, in the Synod on the Family next October in Rome and then designated the Most Reverend George Bakar, Titular Archbishop of Pelusium and Patriarchal Vicar in Cairo as a member of the commission of the Joint Community Fund (JCF). The Most Reverend Elie Beshara Haddad, Archbishop of Sidon and Deir el-Qamar, will continue his mission as patriarchal administrator of Jordan. A list of three names has been submitted to the Holy See for the election of the future holder of the Eparchy of Venezuela.

The Synod reiterated warnings against sales or transfers of land and properties belonging to the Church, in violation of the canonical rules and decided to think about a system that respects the rules and interests of the faithful and the Church.

Adorned with the blood of Your Martyrs throughout the world, * as with purple and fine linen, * Your Church cries out to You through them: * "Send down Your compassions upon Your people. * Grant peace to Your commonwealth and great mercy to our souls." (Troparion - Tone 4)

As the first-fruits of nature to the Planter of Creation, * the whole world offers to You, O Lord, the God-bearing martyrs. * Through their prayers and the intercession of the Mother of God * preserve Your commonwealth, the Church, in profound peace, O Most Merciful One. (Kontakion - Tone 8)

Blessed are You, O Christ our God, * Who has shown the fishermen to be all wise, * by sending down to them the Holy Spirit, * and through them You have caught the whole world in Your net. * O Lover of Mankind, glory to You. (Troparion - Tone 8)

When the Most High descended, confusing tongues, * He divided the nations; * but when He distributed the tongues of fire, * He called all to unity; * and, with one voice, * we glorify the Most Holy Spirit. (Kontakion - Tone 8)

"'And [Naaman] dipped himself . . . seven times in the Jordan' [2 Kgs. 5:14]. It was not for nothing that Naaman of old, when suffering from leprosy, was purified upon his being baptized, but [this served] as an indication to us. For as we are lepers in sin, we are made clean, by means of the sacred water and the invocation of the Lord, from our old transgressions, being spiritually regenerated as new-born babes, even as the Lord has declared: `Except a man be born again through water and the Spirit, he shall not enter into the kingdom of heaven.'"