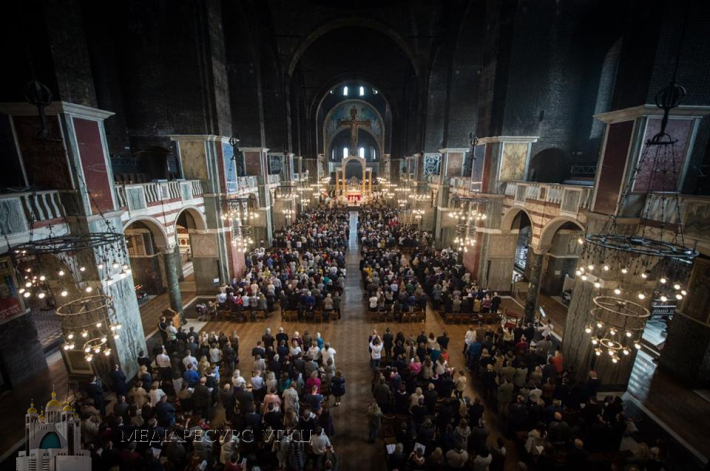 London (risu.org.ua) - On the afternoon of Saturday 28th October 2017, over one thousand faithful descended on London to witness an historic occasion – the celebration of an Eastern Rite Liturgy – at Westminster Cathedral, the Mother Church for Catholics in England and Wales.

His Beatitude Patriarch Sviatoslav, Father and Head of the Ukrainian Catholic Church, along with Eastern Catholic Bishops of Europe and members of the Catholic Bishops’ Conference of England and Wales celebrated the Pontifical Divine Liturgy in the presence of His Eminence Cardinal Vincent Nichols and the Most Reverend Edward Joseph Adams, Apostolic Nuncio to Great Britain. Also in attendance at the Hierarchical service to commemorate the 60th anniversary of the establishment of the Ukrainian Catholic Exarchate/Eparchy were representatives of the Anglican and Orthodox Churches.

During the homily, His Eminence Cardinal Nichols said, “Today, as we Latin rite Catholics witness and take part in liturgies not so often seen in this cathedral, we pray that they can bring us to a deeper understanding of the things of Christ.” He further elaborated on the importance of liturgical catechesis as a tool of evangelisation. The full text of the homily can be accessed online:

You were transfigured on the mountain, O Christ God, * showing Your glory to Your Disciples as far as they were able to bear it. * Through the prayers of the Mother of God, * let Your everlasting Light shine also upon us sinners. * O Giver of Light, glory to You! (Troparion - Tone 7)

You were transfigured upon the mountain, O Christ God, * and Your Disciples beheld Your glory as far as they could receive it, * so that when they would see You crucified, * they would understand that You suffered willingly; * and they would preach to the world * that You are truly the radiance of the Father. (Kontakion - Tone 7)

"My son, do not lose sight of these — keep sound wisdom and discretion, and they will be life for your soul." (Proverbs 3:21,22a ESV)

“The legalization of the termination of pregnancy is none other than the authorization given to an adult, with the approval of an established law, to take the lives of children yet unborn and thus incapable of defending themselves. It is difficult to imagine a more unjust situation, and it is very difficult to speak of obsession in a matter such as this, where we are dealing with a fundamental imperative of every good conscience — the defense of the right to life of an innocent and defenseless human being.”