Luke 2:1-20 - And it came to pass in those days, that there went out a decree from Caesar Augustus that all the world should be taxed. (And this taxing was first made when Cyrenius was governor of Syria.) And all went to be taxed, every one into his own city. And Joseph also went up from Galilee, out of the city of Nazareth, into Judaea, unto the city of David, which is called Bethlehem; (because he was of the house and lineage of David:) to be taxed with Mary his espoused wife, being great with child. And so it was, that, while they were there, the days were accomplished that she should be delivered. And she brought forth her firstborn son, and wrapped him in swaddling clothes, and laid him in a manger; because there was no room for them in the inn.

And there were in the same country shepherds abiding in the field, keeping watch over their flock by night. And, lo, the angel of the Lord came upon them, and the glory of the Lord shone round about them: and they were sore afraid. And the angel said unto them, Fear not: for, behold, I bring you good tidings of great joy, which shall be to all people. For unto you is born this day in the city of David a Saviour, which is Christ the Lord. And this shall be a sign unto you; Ye shall find the babe wrapped in swaddling clothes, lying in a manger. And suddenly there was with the angel a multitude of the heavenly host praising God, and saying, Glory to God in the highest, and on earth peace, good will toward men.

And it came to pass, as the angels were gone away from them into heaven, the shepherds said one to another, Let us now go even unto Bethlehem, and see this thing which is come to pass, which the Lord hath made known unto us. And they came with haste, and found Mary, and Joseph, and the babe lying in a manger. And when they had seen it, they made known abroad the saying which was told them concerning this child. And all they that heard it wondered at those things which were told them by the shepherds. But Mary kept all these things, and pondered them in her heart. And the shepherds returned, glorifying and praising God for all the things that they had heard and seen, as it was told unto them. (KJV – Gospel from the Vigil Vespers and Divine Liturgy of St. Basil)

Christ is Born! Glorify Him! - How shall we approach this great mystery, our Saviour born in time, a Virgin giving birth, God born as man? We might ask a thousand questions, searching for details and explanations and clarifications. It is a reasonable question after all; "How can this be?"

Recall a child's wonder in this season of giving. He might inquire how Santa knew that he really needed a bicycle, and however did he manage to carry it in a sleigh? But a child knows that love made it possible.

As children of a heavenly Father, all our answers come with a simple reply. "It is by the power of the Holy Spirit." What do you wish to know about the Christmas feast?  What question will you ask your angel? The answer is found in accepting that this feast is a celebration of the power of the Holy Spirit, who has accomplished such a wonderful miracle. The Spirit of Love, the Lord of Life, the Spirit of Power has overshadowed our world, and the Virgin conceived, the cave is illumined, and a world transformed. The questions may be many, but the answer is One. "It is by the power of the Holy Spirit!" A profound confidence in the Spirit of God will calm our restless mind, our searching reason, our yearning soul.  Glory be to the life-giving Spirit, our answer and our hope.

The icon is a detail of the Nativity.

Father Anthony Skurla, O.F.M., fell asleep in the Lord after a short illness on December 28, 2020. A friar of Holy Dormition Byzantine Catholic Friary in Sybertsville for more than 72 years, he was well known for his ministry at the friary and his service to many Byzantine churches.

Father Anthony was born to Andrew and Mary Uchal Skurla in Syracuse, New York May 27, 1928. His early education, both elementary and secondary, was in the public schools of Chisholm, Minnesota. He was prepared for the priesthood at St. Basil College, Stamford, and St. Mary Seminary, Norwalk, both in Connecticut.

After making his solemn profession on September 7, 1952, he was ordained to the priesthood on June 14, 1954 by Most Reverend Constantine Bohachavesky at Immaculate Conception Cathedral in Philadelphia.

At the friary, Father Anthony held the following offices and appointments: Master of Novices, Custodial Counselor, Local Superior, Provincial Counselor, and Provincial Custos. From 2011 to 2017 he served as chaplain to the Byzantine Carmelite Nuns of Sugarloaf, and upon retirement in 2017, he resided at Mt. Macrina Manor Nursing Home in Uniontown.

A kind and gentle priest, Father Anthony was blessed with a most pleasant disposition marked by his constant smile, an out-going personality, and a pleasing sense of humor. He was preceded in death by his brothers, George and John, He is survived by his nephew, Archbishop William C. Skurla, Metropolitan Archbishop of Pittsburgh; and many nieces and nephews and their families.

Visitation will be from 10 to 10:30 a.m. Saturday, January 2, in Mt. Macrina Monastery Chapel with all COVID-19 restrictions applying. The Panachida Service will follow with limited space for visitors, then interment in Mt. Macrina Cemetery.

All arrangements are under the direction of the DONALD R. CRAWFORD FUNERAL HOME.

St. John Chrysostom on the True Nature of Fasting

On November 15, we began the preparation for the feast of re-creation, the Nativity of Our Lord Jesus Christ by engaging in the struggle of the forty day Fast of St. Philip.

The following are the words of our holy father, John Chrysostom:

"Let us not speak, indeed of such a fast as most persons keep, but of real fasting; not mere abstinence from meats - but from sins, too. For the nature of a fast is such that it does not suffice to deliver those who practice it unless it be done according to a suitable law.

To the end, then, that when we have gone through the labor of fasting we forfeit not the crown of fasting, we should understand how, and after what manner it is necessary to conduct this business; since the Pharisee also fasted, but afterwards went down empty and destitute of the fruit of fasting. The Publican fasted not; and yet he was accepted in preference to him who had fasted.

Since, then, the danger of fasting is so great to those who do not know how they ought to fast, we should learn the laws of this exercise, in order that we may not `run uncertainly' nor `beat the air' nor while we are fighting contend with a shadow. Fasting is a medicine. It is necessary to know the time when it should be applied and the requisite quantity.

O God of spirits and of all flesh, Who have trampled death, and overthrown the devil, and granted life to Your world; now, O Lord, give rest to the souls of Your departed servants, the soldiers who have laid down thier lives for us, in a place of light, a place of green pasture, a place of refreshment, whence all pain, sorrow, and sighing have fled away. O God, as You are good and the Lover of Mankind, forgive every sin committed by them, in word or deed or thought, for there is no man who lives and who does not sin. For You alone are without sin, Your righteousness is everlasting righteousness, and Your word is truth. For You are the resurrection and the life, and the repose of Your departed servants, O Christ our God, and to You we send up glory, together with Your Father, Who is without beginning, and Your all-holy, good, and life-giving Spirit, now and ever, and to the ages of ages. Amen.

On Memorial Day we remember in prayer the 1.3 million soldiers who have laid down thier lives for us. (Photo by Andrew Stephen Damick) 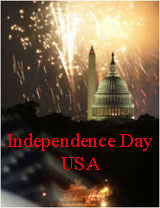 John 8:31-36 - Jesus then said to the Jews who had believed in him, "If you continue in my word, you are truly my disciples, and you will know the truth, and the truth will make you free." They answered him, "We are descendants of Abraham, and have never been in bondage to any one. How is it that you say, `You will be made free'?" Jesus answered them, "Truly, truly, I say to you, every one who commits sin is a slave to sin. The slave does not continue in the house for ever; the son continues for ever. So if the Son makes you free, you will be free indeed.”  (RSV)

True Freedom Comes from God - Jerusalem is beloved of God, and is portrayed in Scriptures and the Liturgy as a loving, nursing mother who gives comfort and love to those who love her. As Americans we celebrate that we, too, have been blessed by God in a country that has so many good things. As disciples of Christ who are also faithful citizens, we are called and challenged to help our own country remain free, governed in a spirit of right reasoning, and to be a source of comfort, justice and peace. As we rightly celebrate Independence Day and give thanks for our many blessings and freedoms, let us remember what true freedom is and from Whom it comes.