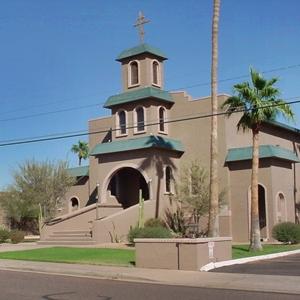 Metro Area: Phoenix (AZ)
St Stephen the Proto-Martyr Byzantine (Ruthenian) Cathedral
8141 N 16th St Front
Phoenix
AZ
85020-4093
USA
Phone: 602-943-5379 (Office)
Fax: 602-997-4093
Email
The Official Website
Semi-official Website
Rite: Byzantine
Church sui iuris: Byzantine Ruthenian Catholic
Canonical Jurisdiction(s):
Metropolitan Archeparchy: Pittsburgh of the Ruthenians
Eparchy: Holy Protection of Mary in Phoenix of the Ruthenians
Cemetery: This parish has dedicated space in a cemetery not its own
Mailing Address: As Above
Served By: Resident Clergy
Sacramental Records: In custody of the parish
Status & Location Changes:
Formed in: 1966, meeting in Phoenix
Parish erected in: 1968, under the patronage of St Stephen the Proto-Martyr
Elevated in: 1994, to Pro-Cathedral of the Eparchy of Van Nuys of the Ruthenians
Elevated in: 2010, to Cathedral of the Eparchy of the Holy Protection of Mary in Phoenix of the Ruthenians
Status: ACTIVE CATHEDRAL
This Entry Last Updated: 06/30/2014
Latitude: 33.556155
Longitude: -112.0479336
Located in: All Active | Show All | Arizona | Arizona
Powered by SobiPro

Today the bonds of childlessness are loosed, * for God has heard Joachim and Anna * and He promises manifestly that they, against all hope, would give birth to the Maiden of God * from whom the Uncircumscribed One Himself would be born, becoming man, * and he commanded the Angels to cry out to her: * “Rejoice, O Full of Grace, the Lord is with you!” (Troparion - Tone 4)

The truth of your deeds has revealed you to your flock, * as a rule of faith, an image of meekness, and a teacher of abstinence. * Therefore, you attained the heights through humility, * and riches through poverty. * O Father and Hierarch Nicholas, * pray to Christ God that our souls may be saved. (Troparion, Tone 4)

In Myra, You were shown to be a servant of the sacred things, O Holy Nicholas, * for, fulfilling the Gospel of Christ, you, O Venerable, laid down your life for your people, * and saved the innocent from death. * Therefore, you were sanctified as a great initiate of the grace of God. (Kontakion, Tone 3)