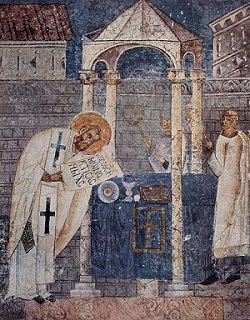 Byzantine/Orthodox spirituality makes no distinction between private and public prayer. “There is continuity between the prayers Christians recite in the assembly of the church, and the interior life by which each of them unites in the divine mystery. The Orthodox Liturgy offers to each one the seeds of contemplation he needs. In return the Church expects of each on a close participation in its prayers of praise and thanksgiving.” (E. Lanne, “La priere des Chretiens d’Orient”). The anchorite in his solitude, the monk in his monastery, and the layman in the daily whirlwind of his life participate in the liturgical prayer even when he is not directly involved in it). (Quoted from Raya/DeVinck: Byzantine Daily Worship, 1969)

Byzantine Christians (Catholic and Orthodox) use the Byzantine Rite. Also called the Rite of Constantinople, it is the liturgical rite (ritual) that developed in city of Constantinople (today’s Istanbul).  The Byzantine Rite consists not only of the detailed liturgical texts and rubrics (instructions) used for Vespers, Matins, the Hours, and the Divine Liturgies, but also the details of icons and how they are painted, the design of the temple, the vestments, liturgical music and tradition which have evolved since the Holy Spirit first descended upon the Apostles in Jerusalem.

This pages is under constant development and we hope to progress in posting liturgical texts for private study and use. The multi-year project currently underway is to produce study texts of official, normative Ruthenian liturgical books published at Rome beginning in 1942 for Byzantine/Greek Catholics of the Ruthenian Recension. The translations offered here for private study will be in full conformity with both the Liturgical Instruction and Liturgiam Authenticam (meaning they will be complete and literally accurate translations). Links to other sites are for informational purposes. Please check back occasionally to see our progress.

The listing below begins with the texts of the Divine Liturgeis, since they are the most commonly used. In reality, the Byzantine day runs from sunset to sunset, so the liturgical day begins with Vespers and hits its height with the celebration of the Eucharist in the Divine Liturgy. The exception is during the time of the Great Fast, when the liturgical day runs from morning to night.

For a full listing of the Byzantine Liturgical books see: orthodoxwiki.org/Liturgical_books_of_the_Orthodox_Church

The icon is Saint Basil the Great consecrating the Holy Gifts during the Divine Liturgy (icon in the cathedral at Ohrid).

There are several forms of the Byzantine Divine Liturgy. The Liturgy of Saint John Chrysostom is celebrated throughout most of the year. The Liturgy of Saint Basil the Great is celebrated ten times each year: on the five Sundays during the Great Fast (Lent), joined together with Vespers on the Eves of Christmas (December 25) and Theophany (January 6), joined together with Vespers on Holy Thursday and Holy Saturday (or on the day of those feasts when they fall on a Sunday), and on the feast day of Saint Basil (January 1). The Liturgy of the Presanctified Gifts (which has no consecration but distributes the Holy Mysteries consecrated the previous Sunday) is generally celebrated on Wednesdays and Fridays of the Great Fast and the first three weekdays of Holy Week. The Archiraticon is an editon of the Divine Liturgy with the additional texts and rubrics thyat are used when a bishop celebrates.

Vespers - Evening Prayer of the Day (chanted at sunset, which is when the liturgical day begins, following the ancient Jewish tradition)

Midnight Office (a monastic office which is chanted in the middle of the night, or early in the morning)

Other Texts (all in pdf)

The texts provided on this website are to be considered as study texts for personal use.If you would like a "paper copy" suitable for duplication please contact us.